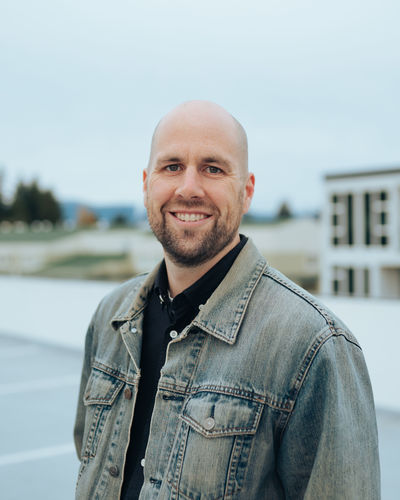 The start in Williams Lake

Evan grew up in Williams Lake, BC at a Mennonite Brethren Church where he developed a love for Jesus and the local church. Though it was in Williams Lake that he started recognizing that God was directing him to full time ministry, it was not a call he easily accepted.  Instead he moved to Victoria, pursued a degree in English to become a teacher, attended Coastline Church, and met his wife Kendal who was both in a class with him at UVic and on worship team with him at Coastline Church (him drums, her singing).

To try to alleviate some of the guilt he felt for not pursuing full time ministry Evan applied to be a youth volunteer at Coastline Church (which was formerly known as Glad Tidings Church) but his application was declined.  Two years later, and most certainly because of divine intervention, Evan was offered the full time position of Youth Pastor at that church. Pastor Andy Moore had recognized God’s calling in Evan’s life and extended the invitation to ministry.  It was certainly not his education nor youth ministry experience that opened the door since he had next to none of either.  It was simply God’s good plan. Newlyweds Evan and Kendal radically changed their future plans and welcomed the opportunity that God was putting in front of them.  As time in ministry passed, their passion for people coming to know Jesus and for the local church was growing exponentially.

The call to the Comox Valley

After six years of ministry at Coastline Church in Victoria Evan and Kendal, and their then two kids, moved up to the Comox Valley to take on the Lead Pastor position at Northgate Church in March of 2015.  While they were uncertain what that would look like, they were certain God was leading.  Since coming they’ve added another to their family and now Evan, Kendal, Isabella, Hardy and Nola are loving life in the Comox Valley.

Evan has a passion to see people reached for Jesus and is also excited to see the local church grow in number and grow in vibrancy.  He continues to develop a team around him who will work hard and dream big.  They are regularly looking for what else can be done to share the news of Jesus, help people walk out their faith and make an impact on the Comox Valley and Vancouver Island.  Evan and Kendal have committed to being in the Valley as long as God wants them and they are hopeful that He won’t ask them to leave until the whole island knows Jesus, the hope of humanity.